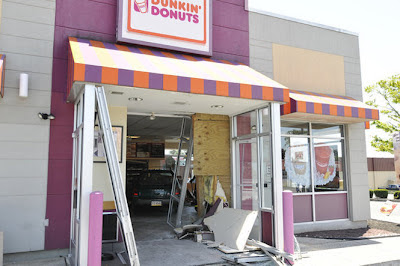 A driver described as an 'elderly woman' accelerated while pulling into a parking spot in front of a Bethlehem, Pennsylvania, Dunkin' Donuts and crashed through the entrance today, injuring five people, according to LehighValleyLive. The driver's car came to a rest inside the shop in front of the cash registers.

While the injuries from this crash were reportedly not deemed serious, LehighValleyLive noted that two fatal vehicle-into-building crashes had occurred in the area:

I can't help noting the two bollards in front — set so far apart at the far sides of the shop's entrance that, well, a vehicle could drive straight between them.  'Just sayin'....

Thanks to Rob Reiter for the heads-up on this accident.
by Mark Wright

Vunleralbe stores should install strong metal bollards in front of their storefronts. They don't have to be terribly big, or unattractive. Problem solved?