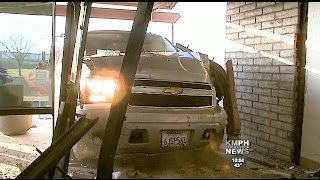 The California Highway Patrol got an unwelcome New Year's surprise at its Madera office on Sat., Jan. 5. The Merced Sun-Star reported that a former mayor of nearby Chowchilla suffered an apparent "coughing attack" and plowed through the CHP's entrance.

In the process, he took out "two concrete, sand-filled trash cans, placed to protect the front door of the building" and "destroyed two vending machines" before his vehicle stopped inside the lobby.

Driver Jim Kopshever — whose city council term just ended last month — was not cited due to the medical condition that sent him careening into the CHP lobby. (Good thing. This just isn't the sort of thing a candidate would want to talk about during a campaign.)

Luckily, no one was standing in the normally-busy lobby when the accident occurred. We can only hope the CHP decides to replace those sand-filled containers with something less moveable after its building repairs are complete.

Thanks to Rob Reiter from Blockaides for the heads-up on this story and for providing the photo.